Allure of the Bosphorus

The Turkish Air Force had showcased itself splendidly during the International Symposium on Air Warfare, held at the in this April. With over 200 delegates from 60 countries to take care of, Turkish hospitality was at its legendary best, and it was no wonder that the participants found the event to be an unqualified success. The hectic days in the huge auditorium – one of the most impressive I have seen – were quite thoughtfully rounded off with a gala dinner by the Bosphorus waterside.  A nippy drizzle added to the allure of the shimmering waters, as we munched on appetisers at a swank restaurant next to the – commonly called the – on the Bosphorus. (Interestingly, the restaurant is run by and the profits are used to administer scholarships to needy students).  The meal was a multi-menu, multi-course affair, low on fats but with enough harm for those with a sweet tooth, as the Turkish lokum and baklava can be taken in heaps, unabashedly.  Chai – always without milk – served from huge brass samovars by traditionally-dressed waiters, completed the Ottoman gastronomy fest by the Bosphorus. All that remained was a cruise down the strait, but we had to wait till next morning, for the Turkish Air Force had planned a deluxe tour for us.
As I peeped out of my window at daybreak, I saw a huge pleasure craft anchored by the quayside of our beachfront hotel.  Thinking that some visiting Arab sheikhs were ready to launch off on one of their pleasure jaunts, it took me a while to note that the cruiser was surrounded by military police and coast guards; the likely passengers were, hence, none but us!  It was not long before we were ushered on to the triple-decker cruise craft by smart Turkish Air Force escort officers. The weather was partly cloudy, which was just as well to keep the reflected sunrays from discomforting us during the planned three-hour cruise.
The Bosphorus is a 31-km long channel that connects the to the north with ’s inland Sea of Marmara to the south; the latter is in turn connected to the through the . The Bosphorus forms the boundary between and , while also cleaving into European and Asian parts.  As we started the tour, huge tankers could be seen plying through the Bosphorus, which at one place narrows to a mere 700 metres and involves rather acute turns to navigate.  During winter fog, navigation through the channel can be extremely risky.  The Bosphorus has been notorious for accidents which have included vessels running aground, collisions with other vessels, spillage of petrochemicals and even the drowning of a consignment of 21,000 ill-fated sheep into its waters.  Thank goodness, we didn’t have to be bothered about any mishap  as our senses were too overwhelmed by the allure of the scenic Bosphorus. 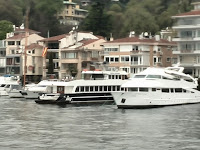 Our tour started from ’s Sariyer locale towards the , in a northerly direction.  The population started to thin out beyond Sariyer and half an hour later, we were at the fringes of the vast that has lately been in the news due to the Crimean crisis.  After notching up an ‘I was there’ claim, we turned around and hugged the western bank, alongside the famous waterfront properties. Known as yalli, they belong to the rich and the famous. We were told that the average price of the yalli alongside the Bosphorus runs into millions of liras, and one of them fetched the fourth highest price ever for a waterfront villa, anywhere. 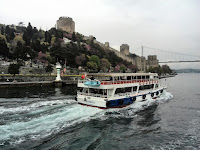 On the way south, we went past the , in whose vicinity we had dined the previous night. Half a kilometre from the bridge is the Rumeli Hisari, a fortress built by Sultan Mehmet in 1452, shortly before his conquest of the Byzantine capital ( of today).  An earlier attempt by his predecessor to capture the capital had been stymied, due to a blockade of the Bosphorus by the Byzantine fleet.  In the event, the fortress garrison proved useful in warding off any maritime threat, and Sultan Mehmet was successful in bringing down the after all.  The Rumeli Hisari and the modern bridge evoked recollections of our Attock Fort and the adjacent bridge over , though the similarities did not go much beyond the placid riverine scenery against a hilly backdrop.
As we approached the (or the , as it is commonly known), I started to look out for the beautiful Grand Mejidiye Mosque at Ortakoy, a locale quite popular with the tourists. The Neo-Baroque style mosque completed in 1856, had been under repair for the last several years. During my previous visit three months earlier, I had heard that it would be inaugurated in April after renovation was complete. Unfortunately work was still continuing, and scaffolding obscured what might have been a most mesmerising sight of the waterfront mosque, that is best viewed from a boat in the Bosphorus.
Sultan Abdul Mejid-I, we are told, was not too pleased to learn that European palaces were far grander than Topkapi, where previous Ottoman Sultans had resided for four centuries.  Lacking style and luxury, Topkapi was to be abandoned in favour of a new palace along the Bosphorus. Completed in 1856, the was a huge drain on the Ottoman economy, what with 35 tonnes of gold and the richest furnishings, carpets and chandeliers lavishing its interior. I had been awed by the interior of the palace during an earlier visit, but what was left to savour was its magnificent view from the Bosphorus. This time around, we cruised past the vast palace, imagining the Sultans and their harem populace cavorting in an earthly garden of Eden. Alas, the construction of the magnificent palace had contributed to the weakening of the Ottoman treasury; the opulent lifestyle and luxury of the court could last a mere 68 years before the Empire disintegrated in 1924.  Today the showpiece of the decaying Empire is a major tourist attraction both from within, and from the banks of the Bosphorus. 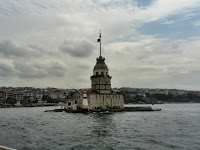 Still within sight of , we felt quite like the Sultans as our pleasure craft was being outridden by Coast Guards speedboats that were ensuring a security cordon all around.  It was past mid-day and lunch was announced.  With a rich and lavish menu to choose from, we sampled a bit of every offering from the Turkish cuisine.  A hearty fill was good fuel topping too, for we had another four hours to walk through Istanbul’s historic quarters, once ashore.  Our boat zigzagged the final lap, going past a legendary lighthouse known as the Maiden’s Tower.  Sited on an islet, it is purported to have been an ancient Customs tower later converted into an observation post by Fatih Sultan Mehmet following the siege of . It was reconstructed after a fire had gutted the older structure. Today it serves as a lighthouse as well as a popular café, and private boats make regular trips for an evening soiree.  I thought it was a good idea to disembark there for a cup of coffee, but with no private boat to wait on me, I joined the rest of the crowd for the trip that remained to be covered on foot. 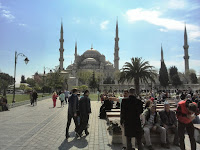 The Bosphorus cruise ended at an exclusive pier just next to , from where we disembarked and walked across for a guided tour of the palace.  After doing Topkapi, we moved on to Hagia Sofia, the grand Eastern Orthodox cathedral commissioned by the Byzantine Emperor Justinian and completed in 537. The third ‘must-see’ site was the nearby Sultan Ahmet Mosque (also known as Blue Mosque) completed in 1616. We could see the mosque rather briefly, for the caretaker took his time to give us a historical rundown, along with a takeaway sermon. We learnt of an interesting snippet, that the five daily calls to prayer are chanted in five different tonal variants, so as to keep the faithful attracted to the religious duty. The caretaker claimed that the congregations had grown ever since this new innovation had been incorporated!
A full day it was, but the trip was most enjoyable as most of the sites that I had seen earlier from inside, had now been viewed from the shimmering waters of the Bosphorus. If a traveller has just one day to spare in , a cruise on the Bosphorus, followed by a visit to the three grand structures in the historical quarter, is highly recommended for capturing the essence of .

This article was published in the daily newspaper The News International on 11 May 2014.
Posted by Kaiser Tufail 1 comment: