With the lone hotel in Makran having closed down recently due to security concerns, one has to think twice about exploring this fascinating vastness by camping out in the open. I was lucky to take up the offer from a naval colleague and decided to spend a tranquil weekend at the Naval Mess in Ormara. The allure of watching the turquoise waters of gently curving bays, from an exclusive viewpoint perched on the enchantingly beautiful ‘hammerhead’ was too much of an opportunity to let pass; and what better way to get there than by driving down the excellent highway which, at places, overlooks the dazzling Arabian Sea with the stratified hills of the Coastal Makran Range for a picture-perfect backdrop.

With my old Air Force friend Nauman Farrukh for company, we set course early in the morning and headed via the Northern Bypass towards the industrial estate of Hub. From there, as we drove along the RCD Highway to Uthal, we picked up many features familiar to us from the air during our bombing runs of yester-years at the Sonmiani Firing Range. We were so busy recollecting old stories that we completely missed the turn to the Makran Coastal Highway. After nearly reaching Bela, we realised our mistake and turned back to Zero Point, 18 km south of Uthal, from where the highway starts. The traction of the tyres suddenly smoothened out as we coasted along one of the finest roads in the country. The road widely arcs around the inland sea known as Miani Hor where all sorts of aquatic birds can be seen; it can be visited only in a 4x4 vehicle due to rough terrain. About 90 km from Zero Point is another marvellous geological feature, the famous Chandra Kop mud volcanoes of Makran. Located about 6 km off-road, the three volcanoes can be visited in a 4x4 vehicle; however, one must be prepared for a very bumpy ride over sand dunes and thick shrubbery.

The desolation of the countryside is evident all along, with hardly any population centres, save for a few reed huts here and there. There is no evidence of agriculture or even rudimentary industry, anywhere. The road traffic is thin, with about one vehicle passing by every 3-4 minutes. Roadside shacks serve tea and beverages, while some also sell petrol, hand-pumped out of barrels as there are no proper petrol stations on the way. About 100 km from Zero Point, the road starts to run south-west along the base of a hill range that eventually dips to the edge of the sea. For those not so lucky to manage a night’s stay in a forces’ Mess at Ormara or beyond, the drive must end at Hingol River crossing near Aghor (about 3½ hours from Karachi) so that a return journey can be completed before nightfall.

We took a tea break at a roadside shack short of the Hingol Bridge that also marks the beginning of Hingol National Park. Nearby, a signboard proclaims – dubiously, I think – the site of the graves of Muhammad bin Qasim’s soldiers, though their design and vintage seem similar to those at the 15th–18th century Chaukundi Necropolis north of Karachi. Another signboard indicates the road branching off to Nani ka Mandir, a Hindu shrine of great antiquity, about 15 km inland near Aghor. Since there is no bridge over the river and the water level was high for fording it, we decided to leave it for some later adventure. 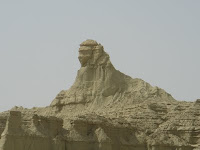 Beyond Hingol River, the road passes through defiles and gullies in the hill range. Odd shapes chiselled by the wind and rain can be seen, the most remarkable of all being a huge sphinx-like figure. Not too different from the famous specimen at Giza in Egypt, it only needs some refinement and finer shaping of facial features to qualify as the Sphinx of Baluchistan. Other naturally sculptured shapes include pagoda-like structures, lofty towers and human figures; one of the latter is said to have been named Princess of Hope by none other than Angelina Jolie, while on a flood relief tour a few years back.

As we got closer to Ormara, the huge mass of the promontory jutting out into the sea became visible. We were low on fuel so our immediate concern was to find a petrol station in the town. As we drove through the town’s central street, we saw numerous shops selling Iranian bootlegged petrol, besides the usual groceries and vegetables. A shopkeeper’s assurance that it was top grade fuel prompted us to get a refill; in the event, we did not have any engine issues on the return leg. The drive through the town had nothing to show but pot-holed streets and an unkempt look. Iranian-made motor bikes are the principal means of transportation in the town. Occasionally a woman wrapped in a black chador would scamper past, somewhat uncomfortably. We found the locals to be generally good-natured and friendly. Almost everyone spoke Makrani Baluchi with a Persian lilt to it, though Urdu is the lingua franca in much of Makran. Unfortunately, literacy rate in the area does not reach two figures for males, while for females it is absolutely zero. A school administered by Pakistan Navy, however, promises to change things in due course. 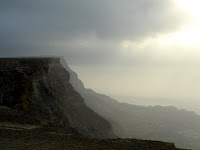 After reaching the Mess we had a quick shower and, hurried to be in time to watch the sunset from atop the hammerhead which rises to 1,500 ft above sea level. A winding road covering a distance of 17 km takes one to the top, where a small viewing enclosure aptly named Bay Watch offers the most stunning views of the East and West Bays. Unusual for the month of July, we encountered cold winds that lashed the sheer cliffs draped in low clouds. Ospreys struggled to keep balance in delightful aerobatic flight as they scanned the shore for fish and crabs. About 50-odd fishing boats could be seen in the shallow waters off Ormara town. The Jinnah Naval Base stood out as an ultra-modern facility in the clear blue waters of East Bay. The picturesque view did a lot to soothe our tired eyes, much as the feast that followed did to our mid-sections, a little later! After the long day was done, we drove down the hammerhead in pitch dark, with our headlights picking out several hedgehogs setting off on their nocturnal forays.

Next morning we decided to go around the town to check the activities. Plenty of men were busy catching crabs on the West Bay which is a daily chore for those who cannot afford a fishing boat. Many others have found jobs as labourers at several of the Navy’s construction sites. Poaching of falcons for Arab Sheikhs is rampant, we were told; a sizeable number of shikaris indulge in this illegal falconry trade which earns them handsome amounts. The beautiful Sooty Falcon (Falco concolor), a summer breeder on the Makran Coast and the Peregrine Falcon (Falco peregrinus), a winter visitor to the area, are prized birds which has been the cause of their declining numbers.

The Navy is well-respected in Ormara, especially for its welfare efforts which include free medical care for the locals and subsidised rations purchase. An upcoming 100-bed hospital is certain to extend health care to far-flung areas. In a few years, one expects the first batch of educated youngsters from Ormara enlisting in the Navy, which would be a turning point for the locals, both from the point of view of employment opportunities in this far-flung region, as well as national integration. 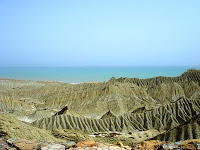 Having spent a wonderful weekend, we were ready to leave at mid-day. Shortly after driving out of Ormara, we saw two more mud volcanoes about 3-5 km off-road (approximately 18 km north-east of the town). Since we had to get back to Karachi before sunset, we could only view them from a distance. During the journey, a lot of landscape pictures were taken. We noted an excellent spot at Kund Malir for those who insist on hazarding a camping trip. About 25 km west of the Hingol river crossing, the rocky Ras Malan plunges into azure waters, and date palms laden with fruit seem to soar above the huge sand dunes of Kund. This is Arabian Sea in unmatched splendour.

It must be noted that mobile phone signals in the area are poor to non-existent; a car breakdown could thus turn into a nightmare, so it would be best to travel in a convoy of two vehicles. A jerry can of extra fuel, a properly inflated spare tyre, jump start leads and a strong towing cable are a must for travel safety. Needless to emphasise, a stock of delicious snacks and cold beverages could enrich the outing manifold! A Sunday on the Makran Coast is a thrilling picnic waiting to happen. Wise words: don’t wait!

© M KAISER TUFAIL. This is an open-access article published under the terms and conditions of the Creative Commons Attribution Licence, which permits unrestricted use, distribution, and reproduction in any medium, provided the original author and source are credited.


This article was published in the daily newspaper The News International on 4 September, 2011.