Off the beaten track, nestled in the hill forests and, ringed by beautiful lakes, Sakesar would be an inconsequential village, were it not for the salubrious alpine weather, seemingly incongruous in the hot and dusty plains of Punjab. Located at the western edge of the Salt Range, Sakesar is an important Air Force Base. Formerly a hill station and the summer headquarters of the Deputy Commissioners of Campbellpur (Attock), Mianwali and Shahpur Districts, it was transferred to the PAF in 1961, when it was found that an unhindered line of sight could be offered to a powerful new radar from the highest point (4,992 ft elevation) on the Salt Range. But for a mere eight feet, government officials would have been entitled to the ‘hill allowance,’ I was reminded with a sigh! Today, Sakesar houses important air defence units in a setting that would be the dream of any naturalist, so the air defenders conveniently get to mix business with pleasure, so to speak. 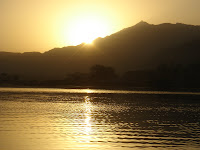 The Soon Valley, which fans out eastwards and southwards from Sakesar, is home to the Awans, a tribe much known for its military prowess in the Great Wars. Nowadays, while the military remains number one choice for most job-seekers, some who prefer to stay closer to home undertake profitable off-season vegetable farming. In yester-years, those who were not well-heeled for the military found a position with the British civil administration as camp followers, attendants and peons. Today, the PAF continues to be one of the biggest employers of local villagers.

Last month, my course-mate Shaheen Hameed and I decided to visit this little-known hill station that we had heard much about. From the motorway exit at Salem for Sargodha and, then on to Khushab took us about one-and-a-half hour. As we headed north to the small town of Naushera (another hour’s drive), the road became narrower, with the usual potholes, stray dogs and scruffy men idling in the middle of the thoroughfare. We drove past Mehria Hotel (no stellar rating) at Naushera; it was later learnt that the hotel has tolerable service and, can take care of all but those who are overly picky about pillow case embroidery and sanitary-ware colours! A district government rest house at Phulwari, not far from Uchali Lake, is about as far as one can expect to get to Sakesar unless one is in, or has served in the blues. The rest house is a two-room affair, neatly tucked away in the foliage wherein the white-cheeked and red-vented bulbuls melodiously jostle for territory. It offers splendid views into the Nammal and Soon valleys on the western and eastern sides.
﻿﻿
A trip to the picturesque lakes of Uchali and Khabbeki can be managed comfortably over a weekend, though a day-long trip from Sargodha would be just as well. The brackish lakes fed by seasonal run-offs skimming the salt-laden hills, are part of the Uchali Wetland Complex that also includes the minor Jhallar Lake. The 3,000 acres of this complex are a birdwatcher’s delight, being home to numerous varieties of birds, especially during the migratory winter months. White-headed Ducks, Greater Flamingos and a variety of grebes are a sample of aquatic birds that can be found especially in this complex. During our visit to Uchali Lake, we were able to see a large flock of hundreds of Black-necked Grebes bobbing over the serene waters.

Fishing in the lakes is prohibited, just as hunting of birds and other animals around. Recreational boating is also not allowed, as the leaky outboard motors are known to spill too much toxic oil in the lake. At Uchali Lake, we met a local volunteer conservationist who owns a small boat. He told us that poaching is rife and influentials still fish and hunt discretely. “If I was a wildlife guard, I guarantee that up to fifty violators would be caught every month, instead of the two or three who are prosecuted presently,” he said. We were not sure if he was offering his credentials as a job-seeker or was a serious conservationist! 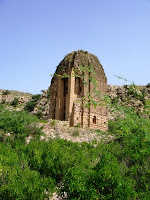 For history and archaeology buffs, the outing would be incomplete without a visit to Amb, where the ruins of a 10th century (AD) temple hark back to the heydays of the Hindu Shahi dynasty. The temple is one of a series of monastery-like complexes that include Malot, Ketas and Nandna that stud the Salt Range. The road to Amb is somewhat circuitous, as one has to first proceed to Quaidabad, about 45-km west of Khushab, thence north to Amb, over a 25km bone-jarring stretch that is best negotiated by a four-wheel drive vehicle. On our way back, we were surprised to see a wedding motorcade of about 40 cars – all white Toyota Corollas, interestingly – and several buses, loaded with revellers of all ages heading towards Khushab, over some of the roughest Salt Range terrain. 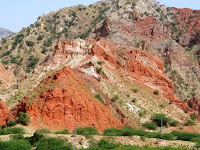 The hills here, as in much of the Salt Range, are laced with ferrous oxides giving them a reddish hue. Depending on the time of the day, colours can range from pastel pinks to muddy maroons, which are magnificently contrasted by the varied greens of kao or wild olives (Olea cuspidata), phullai (Acacia modesta) and sanatha (Dodonea burmaniana) that swathe the hills aplenty. Higher up on Sakesar top, pine cones litter the ground under a dense canopy of chir (Pinus longifolia).

PAF authorities have done a creditable job at forestation and fruit cultivation at Sakesar. In addition to caring for the trees and shrubs that grow in the wild, we were shown luscious orchards of apricots, apples, cherries, grapes, loquats, olives, pears, persimmon and, even a few walnut trees that have been tenderly maintained.


Ever clean as military establishments are, Sakesar has some unusual scavengers which, hand-in-glove with the authorities, ensure that no morsel, no packet of juice remains strewn out in the open. While jungle crows get to work during daytime, wild boar, porcupines and jackals clear up any litter at night. Living in harmony with the residents, these animals have seldom been nuisance enough to justify a cull. Strolling after dinner one night, we suddenly found ourselves in the company of a dozen boars of all sizes, emerging from the bushes at a rather close range. Just as we braced ourselves for a possible charge, they trotted off with heavy grunts, seemingly assuring us of their compliance with a tacit ‘live and let live’ arrangement!

In ‘Letters from India,’ Lady Anne Campbell Wilson wrote home about Sakesar in the year 1889. “Blessings on the man who dreamt about Sakesar and made it an English home. I am delighted with our new quarters. You can’t imagine the kind of material pleasure one has in material things that simply look English…. We look down from heights on valleys and mountains, the whole vista sometimes concealed by mists, perching us high above the whole world! …… Our hilltop is sparsely covered with olives and wild figs, acacias and a few stunted fir-trees, and has a narrow footpath running around it, giving us a two-mile walk in the evening, with tennis on the one little public tennis-court as an alternative form of exercise…… Dotted along the northern side of the hill are four bungalows, one called the Bannu Bungalow, another the Deputy Commissioner’s, a third the Mission Bungalow and the last the Policeman’s.” 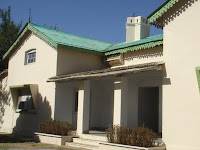 More than a hundred and twenty years later, the Deputy Commissioner’s bungalow, much renovated, is the residence of the PAF Base Commander, while the three other bungalows -- in their original form still oozing colonial charm, but awash with ghoulish ghost stories -- house some strong-nerved junior officers and their families. We visited an old, unoccupied colonial bungalow that could not have been very different from Manderley of Daphne du Maurier’s Rebecca. A long driveway heaped with rustling dry leaves brought us to a creaky gate. Shrubbery had grown to monstrous heights and gnarled roots had grown insidiously into concrete pathways. The fantastic view of the valley was only obscured by low branches of stunted oaks. It was here that a certain Mary resided, whose ghost lives on and frequents the bungalow on dark windy nights, we were told. Till a few months ago, this place was occupied by an officer’s family, we learnt with amazement. Devotion to duty, surely, has many shades!


Weather records of Sakesar, available in the Imperial Gazetteer of India (Punjab Province), mention temperature readings taken in the summer season of 1866 indicating that “the average temperature was 75º(F), or one degree less than summer heat in England.” We could have added that the autumn temperature too, is similar to England’s, for only a day before our visit, Sakesar had experienced an unusual October hailstorm that left the ground like a white sheet for over an hour!

Municipal, development and conservation authorities of other hill stations would do well to take a leaf from pristine and unspoilt Sakesar, which in this age of wanton commercialisation, continues to exude an old-world charm so delightfully described by Lady Anne of yore.
© M KAISER TUFAIL. This is an open-access article published under the terms and conditions of the Creative Commons Attribution Licence, which permits unrestricted use, distribution, and reproduction in any medium, provided the original author and source are credited.

This article appeared in the daily newspaper The News International on 21 November 2010, under the title 'Pristine and Unspoilt'.